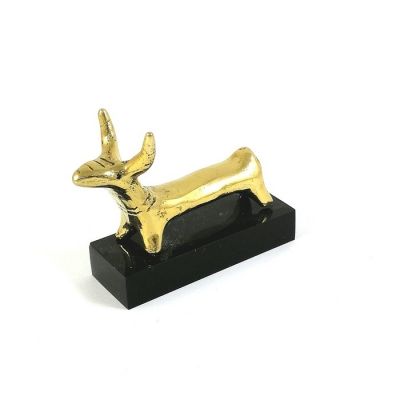 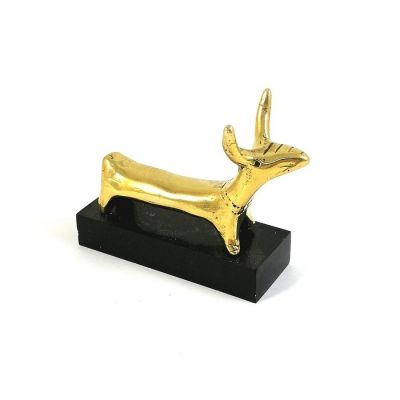 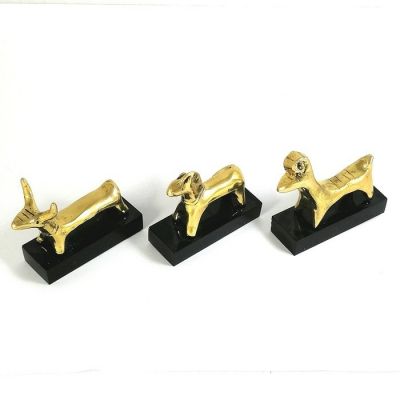 This small bull figurine is inspired by the shape of a clay ancient toy found in Crete. Ancient Greeks strongly believed that the toys played a very important role in the bringing up of the young memeber of their community. Τhe bull is one of the most common animal symbols of the fertilizing forces of Heaven and the deities that inhabit it.  Handmade casted in solid brass and placed on a black acrylic base. It can easily be offered as an office decor as well. Check out the whole collection the horse and the ram.  Dimensions: 4 cm x 6,5 cm

Bulls and in general animals were very often worshiped in Ancient Greece. The bull itself was consider to be a sacred animal accepted by Gods. In Greek mythology we have many examples. The MinotaurIn in Greek mythology, was a monster with a human body and a bull's head. It is said that it was the offspring of the intercourse of Cretan queen Pasiphaë with the bull sent from God Poseidon to Minos. Minos traped Minotaur in the labyrinth, and fed him with the bodies of the seven youths and seven maidens whom the Athenians at fixed times were obliged to send to Minos as tribute. The Cretan Labyrinth was an elaborate maze-like construction, designed by the architect Daedalus and his son Icarus, on the command of King Minos of Crete. The Minotaur was eventually killed by the Athenian hero Theseus. It was often represented by ancient artists either alone in the labyrinth, or engaged in the struggle with Theseus.