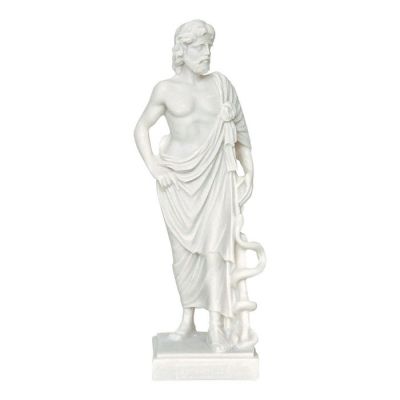 Asclepius was the Greek God of medicine and is considered as the first healer and the "father" of medicine. The sculpture is a resized replica of a statue of Asclepius with his serpent-entwined staff, dated from the late 4th century B.C. from the temple of Asclepius at Epidaurus in north-eastern Peloponnese. The sculpture is made of casted alabaster and is an exquisite museum replica for your home or office decoration.

Asclepius was the Greek god of medicine and healing. He is considered as the "father of medicine" and the first healer. Asclepius was the son of God Apollo and Coronis. Asclepius had five daughters, Aceso, Iaso, Panacea, Aglaea and Hygieia. He was worshipped throughout Greece, but his most famous sanctuary was located in Epidaurus which is situated in the northeastern Peloponnese.

Asclepius is shown as a venerable old man with thick, wavy hair and a beard and is often depicted holding a physician's staff with an Asclepian snake wrapped around it, which still survives to this day as the symbol of the modern medical profession. The cock was also sacred to Asclepius and was the bird they sacrificed to his altar.

The mother of Asclepius, Coronis, was a mortal, the daughter of Phlegyas, a king of Thessaly. Artemis, Apollo's twin sister, killed Coronis, due to her unfaithfulness to Apollo, and her corpse was placed upon a funeral pyre. Apollo felt sorrow for his unborn son and snatched the child from his mother's corpse and handed him to the Centaur Chiron, who became his tutor and mentor.

Chiron taught Asclepius the art of healing. According to Pindar, Asclepius also acquired the knowledge of surgery, the use of drugs, love potions and incantations, and according to Apollodorus, Athena gave Asclepius a magic potion made from the blood of the Gorgon, which is said to be able to bring the dead back to life.

Zeus punished Asclepius for raising Hippolytus from the dead and accepting money in exchange. According to Zeus, Asclepius' action upset the natural order of the universe, so he sent down a thunderbolt and killed Asclepius. However, realising the good Asclepius had brought to man, Zeus made him into a god, placing him among the stars, transforming him into the constellation Ophiuchus (the serpent-bearer).

From about 300 BC onwards, the cult of Asclepius became very popular and the cult centres, which were known as Asclepieia, were used by priests to cure the sick. Non-poisonous snakes were also used in the healing rituals. The temples were always associated with sacred springs, whose waters carried the healing powers of the Earth.

The Romans adopted the cult of Asclepius, but changed his name into Latin and named him Aesculapius. It is also said that Hippocrates was a descendant of Asclepios.

The statue of Asclepius, was found in the Temple of Asclepios at Epidauros and is exhibited in the National Archaeological Museum in Athens.