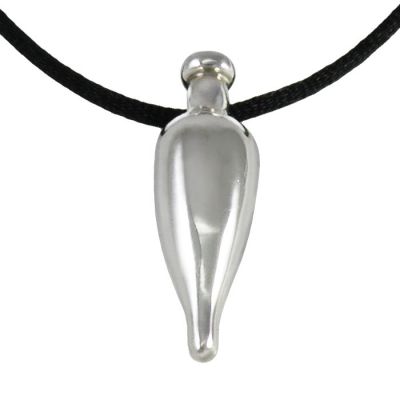 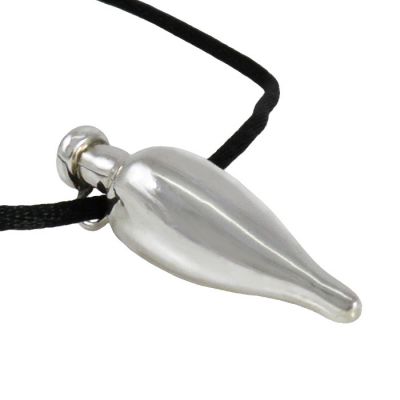 We created a pendant in the shape of a vessel, insired by the the form of an ancient perfium vessel from Cyprus, dated to 1st century A.D.. Perfium vessels often contained precious liquids for culinary use or medicinal creams and perfumes. An impressive pendant in silver 999°, with a black satin cord, that can adorn every style.

No other type of ancient Greek and Roman glass vessel is so widespread and common a find as the myrodoxeio (unguentarium). An unguentarium is a small ceramic or glass bottle found frequently by archaeologists at Hellenistic and Roman sites, especially in cemeteries. Ιt is assumed that they had both funerary use as well as regular household use. They were intended as containers for precious liquids. They may have been used also as a lacrimarium ("tear-container") which was used to collect the tears (lacrimae) of mourners to accompany the beloved in the grave.

This type of vessel’s origins rest in the Hellenistic period. In its early development, the shape was modeled in miniature after larger amphoras. Thin blown-glass bottles began to appear in Cyprus after the middle of the 1st century BC. Myrodoxeia were glass bottles with fusiform or piriform body, tubular rim, oval mouth and cylindrical neck. It was common that they would not stand. The vessels would have been placed in tombs, as gifts, lying on their sides. They vary in shapes, based predominantly on body shape and overall form and there may be variations in both rim type and shape of the base.

Perfium vessels are exhibited in the Cycladic Art Museum in Athens.