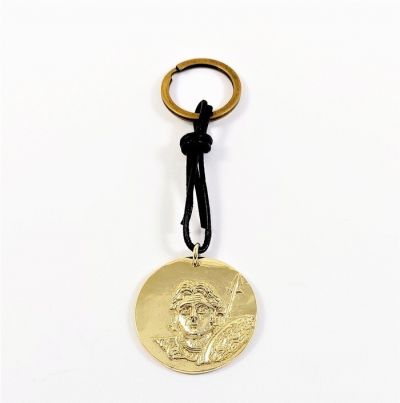 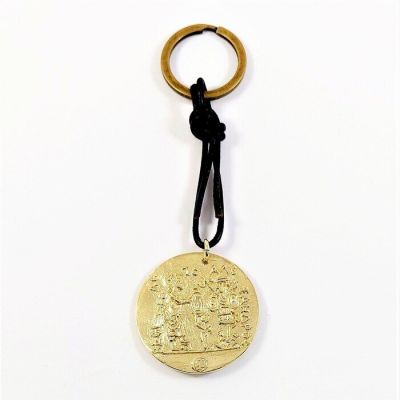 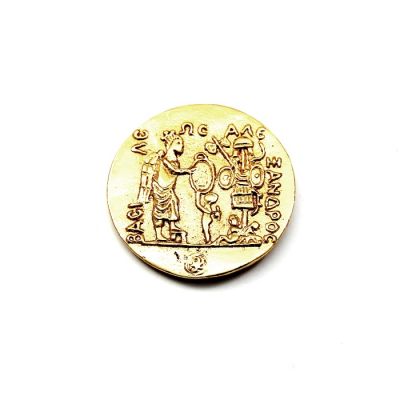 Alexander the Great keyring is an inspiration from the Gold medal of Aboukir. A unique find which depicts Alexander the Great with his shield and javelin. It was a prize at the pentectical Alexandrian Ecumenical Games of Veria in Macedonia, in Greece. An ideal gift for the admirers of the ancient Greek world, but also to offer on a nameday celebration. Handmade replica in solid brass specially designed to show both sides of the medal.

Gold medal from the Roman era from Aboukir, Egypt. It is a "Victory", oversized monetary mark, which was a prize at the pentectical Alexandrian Ecumenical Games of Veria in Macedonia (mid 3rd century AD).

The Macedonian Community organized games in honor of Emperor Gordianos III under the name Olympia. The Olympic Games were testified, according to some researchers, among other things by the Aboukir gold medal, which on the anterior side bears the bust of Alexander the Great and on the reverse the OLYM / PIA AOC inscription, the name of Olympia matches and the dating of AOC AOC dating to 242-243 AD.

But this interpretation is probably wrong and these medals are not related to Olympia Macedonia, but they are simply associated with Olympiad, the mother of Alexander the Great, whose portrait is engraved on the reverse side.