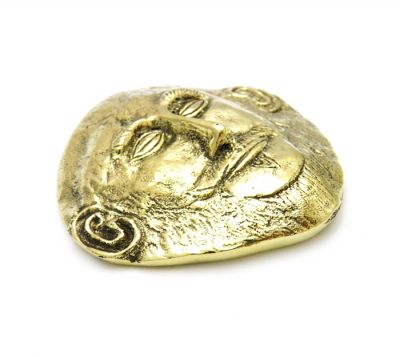 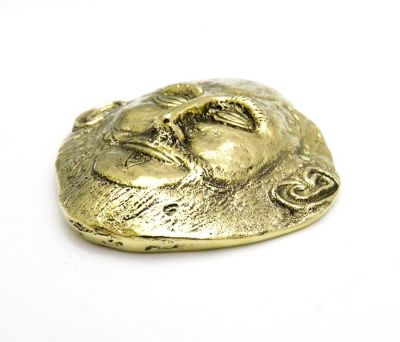 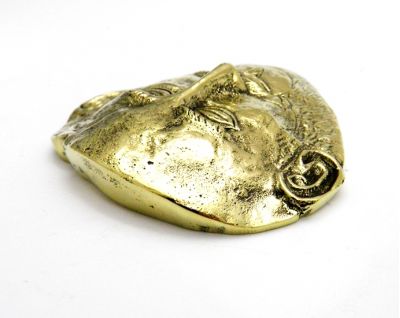 The Mask of Agamemnon, a unique find of great archaeological importance, inspired us to create this paper weight. The mask was discovered by Heinrich Schliemann in 1876 at Mycenae. It is believed that pre-dates the legendary Trojan War by 300 years. Agamemnon in Greek mythology, was the son of King Atreus and Queen Aerope of Mycenae. This unique find led us to create an exceptional item for our office or home.

The mask of Agamemnon was discovered in the excavation of Mycenae in 1876 by the German archaeologist Heinrich Schliemann. The find is a golden death mask and was found on the face of a body that buried in the burial chamber E' of the tombstone A' of Mycenae. Schliemann believed he discovered the dead body of the legendary ancient king Agamemnon, where the find took its name.

Modern archaeological studies have shown that the mask dates back to 1550-1500 BC, a period approximately three centuries earlier than the time when Agamemnon was estimated to have lived. However, the name of the mask despite the discovery remained.

The mask is one of the five that were found in Mycenae, three in Grave IV and two in Grave V. The gold masks that covered the face of the dead kings were supposed to be used to protect the dead from bad influences. The tombs that were found are undoubtedly royal, since the quantities of gold used and the excellent carving art show that it was intended for people with a particularly high social standing.

Agamemnon is one of the most prominent heroes of Greek mythology. King of Mycenae and Argos, and perhaps also the chief of the rulers of Mycenaean territory. He is considered to be the most important of the rulers and the chief commander of the Pan-Hellenic campaign to Troy. He was the son of King Atreus of Mycenae and Aeropi, brother of Menelaos and Anaxibia, wife of Clytemnestra, from whom she had three daughters (Iphigenia, Electra and Chrysothemis) and a son, Orestis. On the occasion of the kidnapping of Helena, Agamemnon managed to build a large army and fleet from all the Greek cities and campaign against Troy. The name Agamemnon derives from the words "agan" (αγαν) and "memnon" (μεμνων - greek words) which mean very persistent, consistent, patient. After his capture and return from Troy he was assassinated by his wife and Aigistho, the lover of Clytemnestra, who had in the meantime taken over the rule of the Mycenaeans.

The mask is exhibited at the Archaeological Museum of Athens.