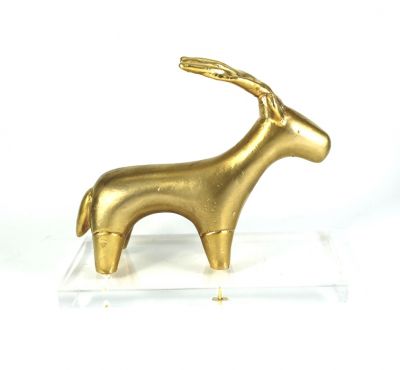 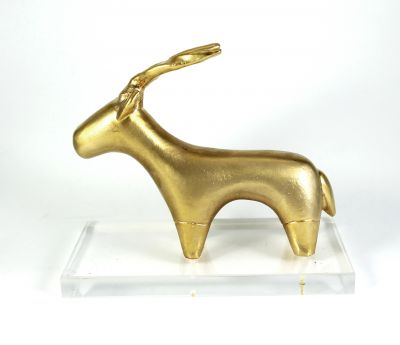 The golden figurine of ibex (aegagros), was our model to create this handmade gold-plated 24K replica. The figurine is unique in its kind, was found among the many findings from the excavation at the prehistoric settlement in Akrotiri,Santorini. It was found in an excellent condition stored in a wooden case, in a clay urn. Akrotiri of Thira is one of the most important archaeological sites in the Aegean Sea.

The golden figurine of ibex, which is unique in its kind, was found among the many findings from the excavation for the foundation of the new pillars of the shelter of the prehistoric settlement in Akrotiri,Santorini (12/12/1999). It was found in an excellent condition stored in a wooden case, in a clay urn. The urn was placed under a pile of horns that belonged mainly to sheep and goats.

The settlement in Akrotiri has an area of ​​approximately 200 acres. All the elements of the excavations indicate the high standard of living and the peculiarities of the cultural level of the inhabitants of Akrotiri. Urban planning, high-rise buildings, drainage system, great frescoes show great growth and progress.

Some of the most important findings discovered during the excavations were the mural paintings of the boxers dating back to 1500 BC, the fisherman's fresco dated back to 1650 BC. and the wall-painting "Krina-Helidonia" of "Spring" found on three walls.

The figurine is exhibited at the Museum of PrehistoricThira in Fira, on the island of Santorini, Aegean Sea.