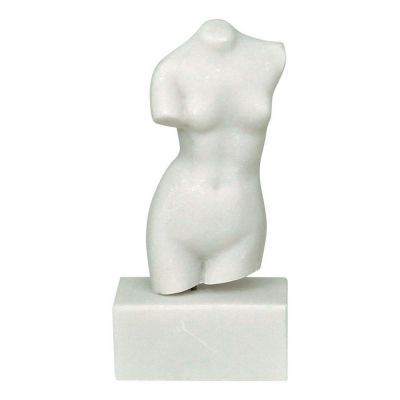 Aphrodite of Milos, also known as Venus di Milo is a unique sculpture of the goddess of beauty and love. The original sculpture dates back to 100 B.C., and is an artwork of the Hellenistic period from the island of Milos, as its name suggests. We created a unique sculpture, based on the ancient statue, portaying the body of the goddess, giving particular emphasis to her curves, which shows perfectly her femininity. Our impressive handmade statue is made of casted alabaster and it is placed on a marble base.

Aphrodite of Milos, also known as the Venus de Milo, is one of the most famous original ancient Greek sculptures. It was discovered on 8 April 1820 by a Greek peasant, in a place that was later identified as ancient Milos’ Gymnasium, in the island of Milos, in the south-western Cyclades. It took its name by the island and it is thought to represent Aphrodite, because of her half-nakedness, her sensual, feminine curves and its iconographic similarity with other portraits attributed safely to the goddess.

The sculpture is made of Parian marble and portrays a young woman, whose torso is nude, holding together her legs as the drapery slides over her hips. The sculpture was found armless, but in its proper status, she must have worn metal jewelry, of which only the fixation holes remain. The statue was made in the late 2nd century B.C., probably by a sculptor from Asia Minor, and reflects innovations that were used during the Hellenistic period, between the 3rd and 1st centuries B.C..

The original statue is exhibited at the Museum of Louvre in Paris, while a copy on plaster is placed at the entrance of the Archaeological Museum in Milos.