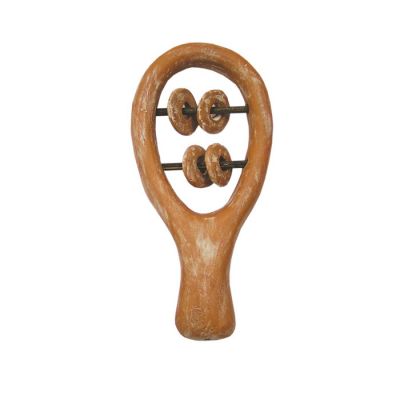 Seistron (sistrum), a musical instrument of ancient Greece. Ancient percussion instrument, made of wood, metal, clay or acombination of all, with varied penetrating and indefinable sound that accompanied the pace in religius processions. The rattle was also known as platagi and it was the first toy given to children and newborns, since the sound it made when they shook it stopped them from crying. It was also believed that the sound of the rattle kept away the evil spirits that lay around a baby’s cradle.

The rattle (platagi in ancient Greek) was the first game given to children and especially to newborns, since the sound it made, stopped the babies from crying. According to ancient beliefs, the ancient Greeks still believed that the sound of the rattle also removed the evil spirits that stood around the baby's cradle. The rattles in ancient Greece were made usually of clay or metal and had different shapes. Rattles in the shape of animals, such as pigs, fishes, bulls , were particularly popular. Inside there were stones or chickpeas to create the sound.

Polydefkis, a Greek orator and lexicographer, writes in the 2nd century AD. at the ''Onomastikon'', that the rattle produced a monotonic sound and so they managed to calm the babies. Aristotle, mention in the Politics that the rattle was invented by Arhyta the Taranta to calm the infants and thus avoid any “damages” in the house.

In the Byzantine period, mothers and nannies of little children, often used as rattle the Seistron. It is an ancient percussion instrument made of wood, metal or clay. The sound that produced was penetrative but also indefinite. They usually consisted of a handle and a frame that had either removable parallel rods or fixed rods with removable perforated objects.

Seistron, is one of the oldest instruments in Europe and came from Egypt were it was used as an instrument for religious ceremonies dedicated to Isis. Its name derives from the verb "seo", which means shake. Shaking the seistron and the small copper discs hanging on it made noise. The first musical instrument was found in the excavations that took place in Crete between upper and down Archanes on the low hill called Fourni.