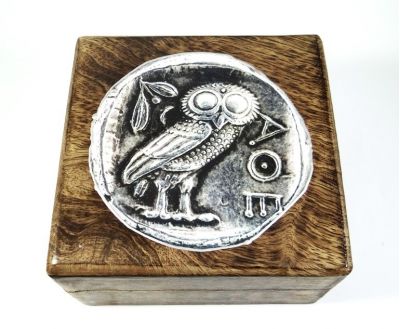 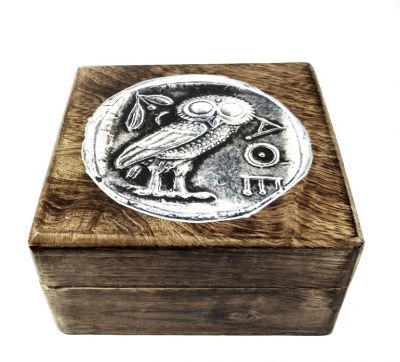 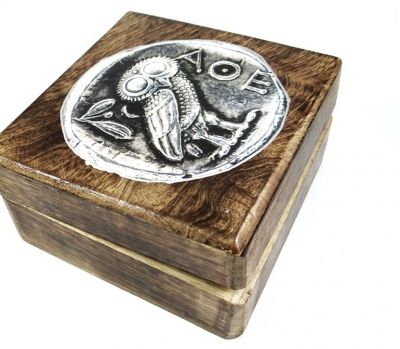 We created this wooden box with the representation of the owl, inspired by the silver tetradrachm coin of Ancient Athens, dated around 449-419 BC. The coin depicts an owl with an olive branch and the inscription "ATHE". The Owl was the symbol of wisdom in Ancient Greece and was the holy bird of Goddess Athena. A “useful” gift proposal for our little and older friends.

Ιn Greek mythology, the owl was identified with wisdom and knowledge because it was the symbol and sacred bird of the virgin goddess of wisdom and protector of Athens, Athena. The owl was protected and inhabited the acropolis. A little owl usually sat on the goddess's shoulder. The inhabitants of Athens, however, believed that the goddess Athena often took the form of an owl when she wanted to be presented to the people.

Proof of the cult of the ancient Greeks for this bird was that they considered the flying of an owl over the Greek warriors in the war as a precursor to the victory of the Greeks. More specifically, according to Aristophanes (Sipke), the achievement of a victory against the Persians is due to the flight of an owl which was used by the goddess Athena as a messenger. Wonderful were the depictions of the owl in the vessels and amphoras that were the prize for the Panathenaic Games.

The owl is also known as the Athenian owl has been decorating coins since ancient times until today.The silver tetradrachm of Athens (449-419 BC) (Athenian tetradrachm) was the most widely used coin throughout Greece in the heyday of Athens in the 5th BC century to the time of Alexander the Great, where by then prevailed the Macedonian coins. It was used in trade throughout the Greek world. The ancient Athenians chose on the obverse of the coin to depict goddess Athena, who also gave her name to the city and on the reverse, the symbol of the city of Athens, the owl (glauka) with an olive branch, the sacred plant of Athens and the inscription ΑΘΕ (athe).