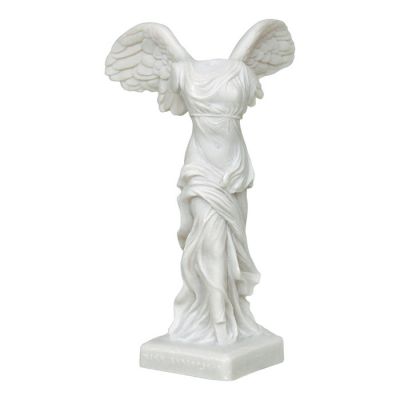 Goddess Nike was a mythological deity of the ancient Greeks, who personified victory and it was usually portayed as a winged woman, who descended on the battlefield or the stadium, to award the winners.We created a copy of the statue of the Nike of Samothrace, dated to the 2nd century B.C., which is one of the most important artworks of greek antiquity, that is preserved until nowadays. A statue, ideal for the decoration of your home, made of casted alabaster.

In Greek mythology, Nike was a goddess who personified victory, and the ancient Greeks sculptors depicted her as a woman with huge wings on her back. She was the daughter of the Titan Pallas and the goddess Styx. According to the myths, Nike was a close companion of Zeus, who was the dominant deity of the Greek pantheon and one of his allies for the Titan War. Nike had probably the role of the divine charioteer. She was sent from Zeus to the battlefield or in the stadium, to glorify a victory or to award a winner.

The Nike of Samothrace, is a marble sculpture by an unknown artist of the Hellenistic era. The figure originally found at the Samothrace temple complex, dedicated to the Great gods and it depicts goddess Nike. The statue was based on a marble ship's bow and it was created around 200-190 B.C.. It is one of the threestatues of goddess Nike, found at the Temple of Samothrace. The goddess is made of white Parian marble and the ship's bow, of Rhodian marble. It is assumed that she was holding a wreath for the winner or had raised her hand to her mouth to announce a victory.

The three statues of the goddess Nike are exhibited at the Louvre Museum in Paris, the Archaeological Museum in Samothrace and at the Kunsthistorisches Museum in Vienna.