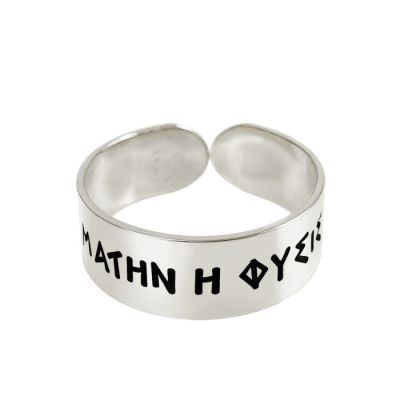 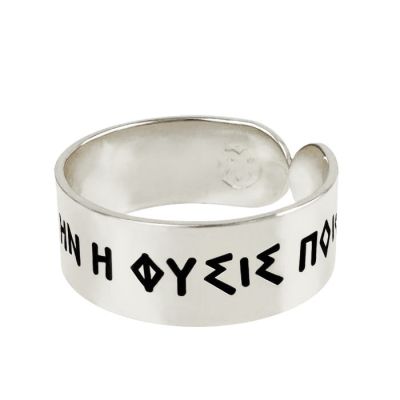 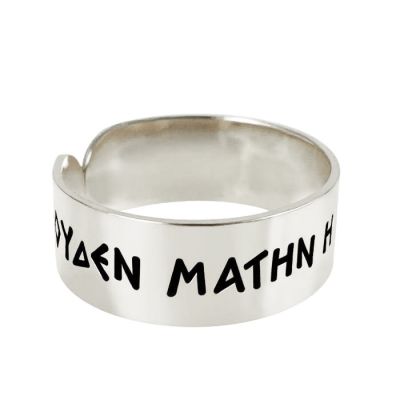 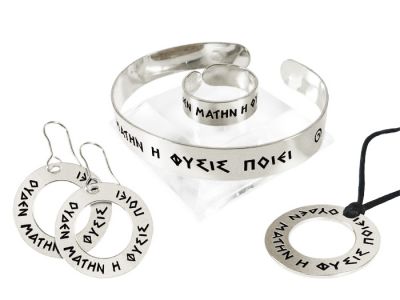 This one-of-a-kind silver ring is handcrafted by experienced artisans and is engraved with lazer, bearing the ancient proverb "outhen matin i physis poiei" by the ancient Greek philosopher, Aristotle. The saying means that "nature does not create anything without a purpose". The ring is made of silver 925°.

You may also like to see the pendant, the earrings and the bracelet of the "Nature" collection.

Aristotle (384 BCE – 322 BCE) was a Greek philosopher born in Stagirus in 384 BCE. He died in 322 BCE, in Chalcis, Euboea. At the age of eighteen, he joined Plato’s Academy in Athens and continued to stay until the age of thirty-seven, around 347 BCE.

His writings cover many subjects, including physics, metaphysics, poetry, theater, music, logic, rhetoric, linguistics, politics, government, ethics, biology, and zoology. Aristotle's writings were the first to create a comprehensive system of Western philosophy, encompassing ethics, aesthetics, logic, science, politics, and metaphysics. Shortly after Plato died, Aristotle left Athens. With the request of Philip of Macedonia he became a tutor for Alexander the Great in 356-323 BCE.

Aristotle achieved merit through teaching Alexander the Great. This distinction allowed him many opportunities, including an abundance of supplies. He established a library in the Lyceum with which many of his hundreds of books were produced. The fact that Aristotle was a pupil of Plato contributed to his former views of Platonism, but following Plato’s death, Aristotle immersed himself in empirical studies and shifted from Platonism to empiricism.

He believed all peoples concepts and all of their knowledge was ultimately based on perception. Aristotle’s views on natural sciences, including philosophy of the mind, body, sensory experience, memory, and biology represent the groundwork underlying many of his works. Many aspects of Aristotelian thought remain an active academic study, however, many of his writing are now lost with only one-third of his original works still surviving.