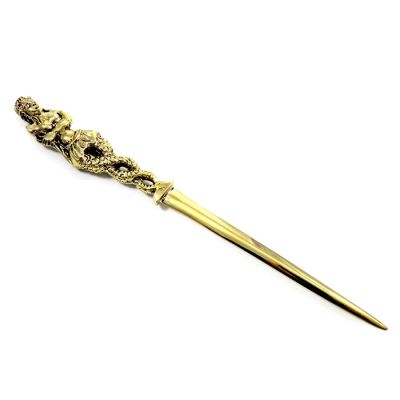 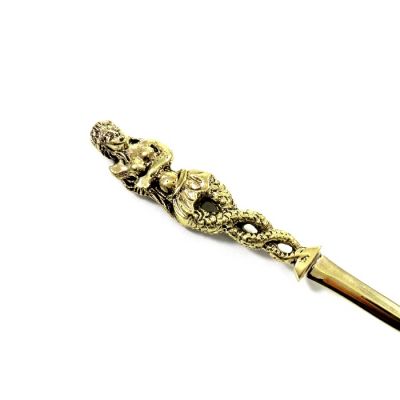 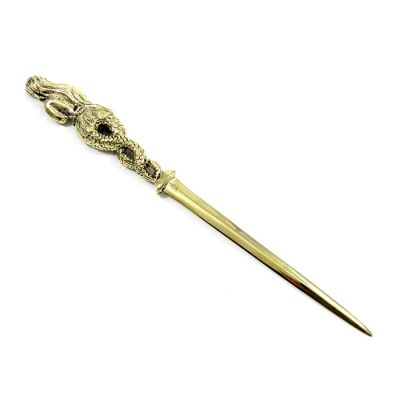 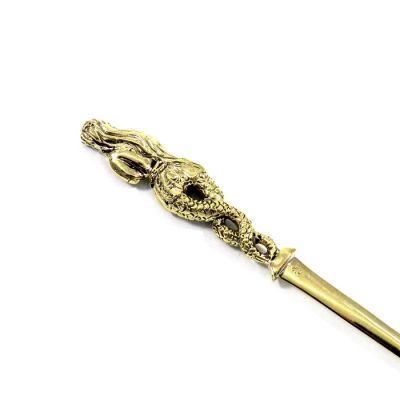 The acrostolia or acropora were wood-carved figures that adorned the bow of ships of the 18-19th century. They usually had a female form, that of a mermaid. It was the ship's jewel and its protector that drove away evil, protected the crew and brought wealth and power to the shipowner.

Mermaids have been an inspiration for artists along the years. It decorated the ship's bow during 18th-19th century. This letter opener is inspired by a woodcarved bow of a sailboat (Akrostolio) from Hydra island during the Greek Revolution 1821. The letter opener is handmade of solid brass.

Μermaids are legendary aquatic creatures with the upper body of a female human and the tail of a fish. Mermaids are depicted as beautiful women with long flowing hair.They appear in the folklore of many cultures worldwide and they are often associated with perilous events such as shipwrecks and drownings.

Mermaids are associated with the mythological Greek sirens. Sirens are found in many Greek stories, particularly in Homer's Odyssey. They were dangerous yet beautiful creatures, who lured nearby sailors with their enchanting music and voices to shipwreck on the rocky coast of their island.

Another popular Greek legend refers to Alexander the Great's sister, Thessalonike, who turned into a mermaid after her death. She would approach and ask the sailors on any ship she would encounter the same question: "Is Alexander the king alive?" (Greek: Ζει ο βασιλιάς Αλέξανδρος;), to which the correct answer would be "He lives and reigns and conquers the world" (Greek: Ζει και βασιλεύει και τον κόσμο κυριεύει!)

Pleased with the answer she would allow the ship and the crew to sail safely away in calm seas. Any other answer would transform her into the raging Gorgon, bent on sending the ship and every sailor on board to the bottom of the sea.

The effigy is kept at the Historic Archives - Museum of Hydra, which was founded in 1918 and it is housed in a building that the ship-owner and benefactor Gikas N. Koulouras, donated to the Municipality of Hydra. The Museum is located near the Harbour Authorities, to the east side of the port. In 1952 Gikas N. Koulouras donated the building to the State. Since then the Historic File Museum of Hydra operates as public service bureau.

Αntonios D. Lignos, mayor of Hydra for over 40 years, tried to sort and transcribe all the files of the island of Hydra, which were found in storerooms inside the Holy Church of Dormition. In 1972, the Museum was re-built with the care and surveilance of the former Bishop of Hydra-Spetses-AeginaΙerotheos and it accommodates the library and the files and historical heirlooms, from the local history, tradition and culture of the island.

There are 18.000 documents, manuscripts, codes and books, which write down the rebellious and after-rebellious times of The Hellenic History, as well as, educational files, administative files, files from the church, from the middle of the 19th Century to our days.The Library includes 4.000 valuable books, mostly from the 18th Century.

Exhibits from the Balcan and first and second World Wars, traditional costumes from Hydra and figureheads from battleships are displayed at the museum department. The museum also houses a historical picture gallery with arts from many great greek and foreigh artists,oil paintings from ships of the Greek Revolution, as wel as portraits of the heroes of the greek rebellion, made from known artists, like Panagiotis Tetsis and Dimosthenis Kokkinidis.

The most remarkable exhibit kept at the Hydra Museum, is probably the silver urn with the stuff heart of the Admiral Andreas Miaoulis. Exhibits of works of art from 18th and 19th Century, guns from the war, nautical maps and the map of Riga Feraios are also kept at the Museum.