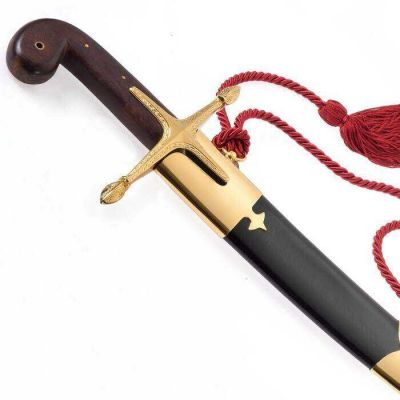 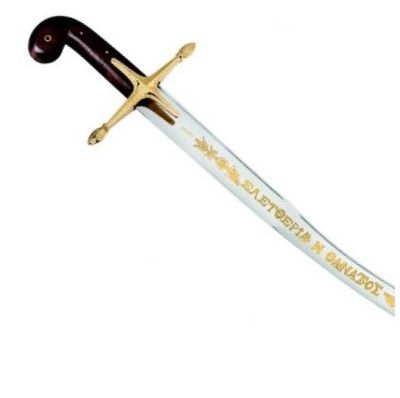 The glorious curved sword of the heroes of the 1821 War of Independence, that armed the hands of the fighters of the revolution and was glorified in the numerous battles of the Greek War of Independence. Its blade features in gold-plated engraving the words "Freedom or Death"! Its handmade guard forms a cross with the handle and features a engarved 24K gold-plated ornamentation. This unique historical heirloom is made by experienced craftsmen with the old traditional techniques. A unique work of art with special value, made of steel with partial 24-carat gold-plating, that will decorate your home.

Greece's Flag contains alternating nine horizontal white and blue parallel stripes, corresponding to the syllables of the historical phrase "Freedom or Death". This was the slogan that sounded everywhere in Greece in 1821! We have created an exceptional Anniversary Sword to pay tribute to the most important anniversary of Greece, celebrating 200 years of Freedom of our country since the Revolution of 1821. This characteristic sword armed the hands of the Fighters of the Greek Revolution and we present it to you in the UNIQUE collectible reproduction!

It is limited to 1,821 only numbered swords, which will be available in strict order of priority. Each Sword is numbered separately, and is accompanied by a Certificate of Authenticity. On the 78 cm blade is embossed the command that enlivened the Greek heroes in their Struggle: FREEDOM OR DEATH! The total length is 93.5cm together with the handle.

Luxury Leather Handmade Scabbard But we could not give you the anniversary "Sword of Freedom" of '21 without its luxurious scabbard, in which after each battle rested the Sword of the brave Fighters. Pieces of black leather were selected for the Scabbard. Following a very professional processing it is as shaped curved as the blade itself and "dressed" to each Sword, seperately. Then it was decorated with metal elements which were 24K gold-plated.

Buy today! Subscribe in our News Letter list and get a special discount of 10% plus Free Shipping and pay only €345 instead €385!. Do not miss the unique opportunity to aquire this handmade special edition Greek Sword today which marks the 200th anniversary from the moment we claimed our Freedom as a nation. Please note that shippments will begin by the end of December 2021.

Length of the blade: 78cm

The sword is inspired by the cutlass (yatagan) of Athanasios Themelis, which has inlaid gold inscriptions, featured on its delicate blade. The Themelis family offered important help to the Greek nation, both in the pre-revolutionary period, and during the War of Independence. In particular, Demetrios Themelis, who was an ardent apostle of the Filiki Eteria (Society of Friends) and the official attaché of Demetrios Ypsilantis, upon his arrival at Peloponnese in 1821, contributed greatly to the War of Independence, for the purposes of which, he offered his whole property.

Τhe Greek War of Independence was also known as the Greek Revolution (Elliniki Epanastasi) the fight against the Ottoman empire, the Greek Uprising as it was also called. It was held between 1821 and 1830. In this fight the Greeks were later assisted by Great Britain, France and Russia. The Ottomans were aided by their North African vassals, particularly of Egypt. The outcome of this war was the formation of modern Greece. Greeks around the world celebrate Independence Day on the 25th of March.