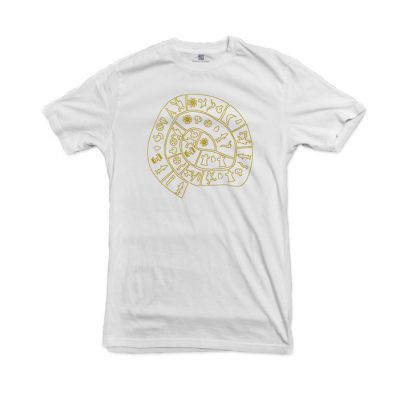 An elegant white t-shirt with a depiction of the Disc of Phaistos, the famous archaeological find from Phaistos in Eastern Crete. The drawing of the shirt is painted in gold and it is inspired by the clay disc, dating to 17th century B.C. The original disc features 241 hieroglyphc motifs. It is unisex, machine washable and made of 100% cotton. A shirt dipicting this mysterious finding for unique looks. Size: small, medium, large and x-large

Indicate your size in the comments' box of you order form.