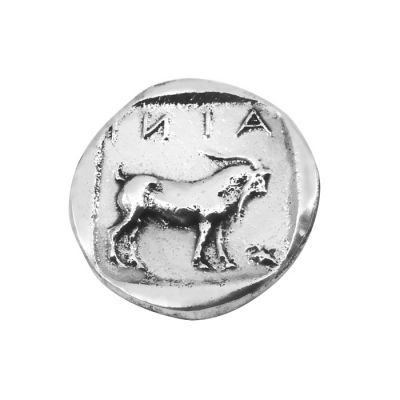 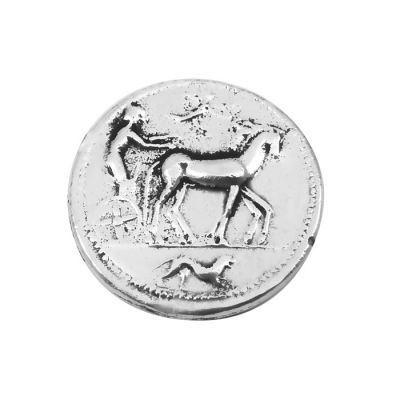 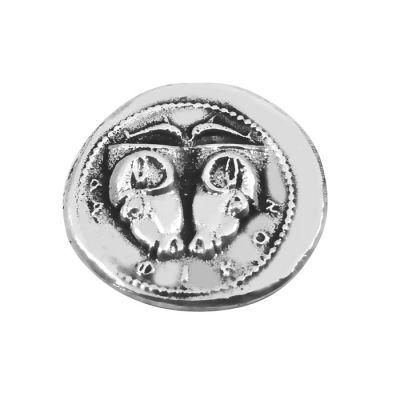 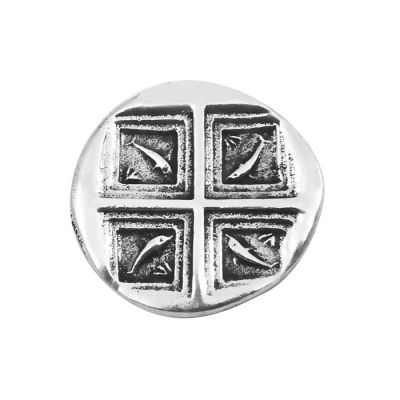 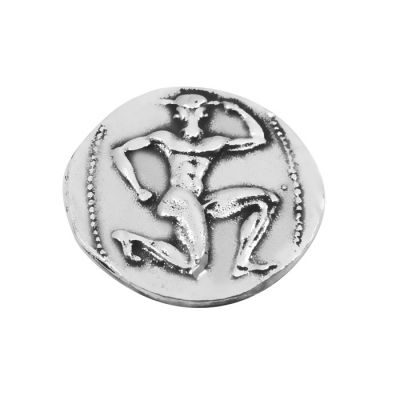 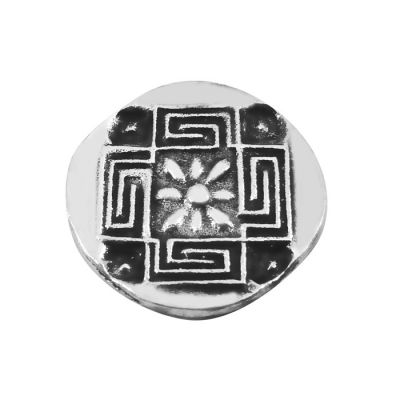 Our ancients coins' set includes four coin replicas with various depictions. The original coins were minted in different city-states and colonies of Ancient Greece. The pack contains the tridrachm (three-drachma coin) of Delphi (480 - 475 B.C.), the tetradrachm (four-drachma coin) of Ainos (5th century B.C.), the decadrachm (ten-drachma coin) of Syracuse (4th century B.C.) and the silver stater of Knossos (425 B.C.). Each coin is made of brass, plated in silver solution 999° and the complete set of coins is encased in an acrylic display case. Ideal as a gift for the admirers of the ancient Greek world, but also for coin collectors.

The set is offered in an acrylic case for protection and better presentation and gift packaging.

The tridrachms of Delphi, minted around 480-475 B.C., are among the most rare of all the Greek coins. The obverse type of the coin shows two rhyta (drinking vessels) in the form of ram’s heads and above them, two dolphins swimming toward each other. The inscription DALPHIKON (ΔAΛΦIKON) is also written in small letters below and the motifs are bordered by a dotted circle.

The ram’s heads are probably a reference to the Greek victory over the Persians at Plataea in 479 B.C, when a great deal of treasure, including silver vessels, was taken as booty by the Greeks. These two rhyta must have been brought as a dedication to Apollo at his temple in Delphi. The designs may also be related to the cult of Apollo. The ram’s head (carnus) was a symbol of Apollo Carnius, which was the god of flocks and herds and the dolphins were associated with the cult of Apollo Delphinius, who assumed the form of a dolphin.

The reverse of this coin is decorated with a quadripartite incuse square in the form of a coffered ceiling. Each coffer is decorated with a dolphin and is supposed to represent the ceiling of the temple of Apollo in Delphi. Ancient coins of Delphi are held at the British Museum in London.

The tetradrachm (four-drachma coin) of Ainos (Aenus), dated around the 5th century B.C., depicts the head of Hermes, wearing a petasos (hat).

The reverse shows a goat standing right and the inscription AINI written above it, all pictured within an incuse square. Hermes was the patron deity of Ainos. The symbol of the goat on the reverse, was associated with the cult of Hermes, and it was a representation of the pasture land that provided prosperity for Ainos. The later coins of Ainos, like this one, are some of the finest numismatic art of the ancient Greeks. Ainos (Enez) was an ancient Greek city on the southeastern coast of Thrace. It was located near the mouth of the Hebrus River.

The silver decadrachm of Syracuse, also known as “Demareteion”, dated around the 4th century B.C., was named after Queen Demarete, who was the wife of the tyrant Gelon of Syracuse. Syracuse was originally a Greek colony founded by Corinth. The coin is a typical example of the Syracuse mint of the classical period and it was executed by the engraver Euainetos. The obverse depicts a four-horse chariot, whose charioteer is being crowned by Goddess Nike(Victory).

The reverse shows the head of the nymph Arethousa, encircled by four dolphins. In Greek mythology, Arethusa was a nymph and daughter of Nereus and Doris, as well as, a chaste attendant of goddess Artemis, who later became a fountain on the island of Ortygia in Syracuse, Sicily. Arethusa occasionally appeared on coins as a young girl with a net in her hair and dolphins around her head. These coins were common around Ortygia.

The silver stater of Knossos, dated around 425 B.C., is one of the earliest coins minted at Knossos, a city on the northern coast of Crete. Its designs derive from the city’s most famous myth, the Minotaur in the labyrinth. The Minotaur had the body of a man and the head of a bull. He was born, as a result to the encounter between a bull and Pasiphae, the wife of the Cretan King Minos. The Minotaur was kept by Minos in a specially constructed labyrinth at Knossos, which was made by Daidalos, and was fed with maidens and young boys sent from Athens as tribute to the Cretan king. According to mythology, Minotaur was killed by Theseus.

On the obverse of the coin, Minotaur is pictured, holding an unidentified object in his raised hand, while a design of the Labyrinth, is shown on the reverse in the shape of a clockwise swastika with a floral pattern in the center and squares in the four corners.